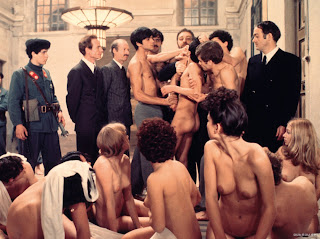 Those Swiss. The film censor in Zurich has decided to ban an old Pier Paolo Pasolini film "Salo o le 120 giornate di Sodoma". The film is from 1975, so you would expect everybody to have seen it all before. But no, even after several decades the old rogue still manages to rile the Alpine bourgeois sensitivities. The French Swiss, on the other hand, have now set up a committee against censorship, and good on them.
The film itself is hardly a masterpiece in Pasolini's oeuvre but that's really not a criterion to ban it. It's amazing how many other countries it has been banned by and later re-classified. In Australia it apparently was re-banned after a brief period of certification. Must be one of Johnnie Howard's bright ideas.
In New Zealand it was only classified in the mid-1990s after a ban. I discussed this with the NZ Chief Censor at the time, Jane Wrightson, but it took a few more years before New Zealanders were allowed to see it. I, of course, had watched it a few times in Europe and since I hadn't turned into a crazy zombie by the experience I could relate that to Jane, lest she was scared of unleashing a horde of new Sade fans.
If you haven't watched it yet, I wouldn't really bother, but read the Sade book instead, one of world literature's finest work on sex and power.

UPDATE: Zurich police has rescinded its ban and the Xenix cinema will now show the film.
Posted by Hans Versluys on Wednesday, February 14, 2007

Email ThisBlogThis!Share to TwitterShare to FacebookShare to Pinterest
Labels: film