We finally joined the 21st century by buying ourselves a Christmas present in the form of a DVD player, nothing flash, nothing fancy, it just does the job. And it didn't need to be able to record anything, when was the last time you actually watched something from TV you had recorded earlier? I bet more material gets recorded over than ever watched.
Naturally we had to leg it to the DVD hire store to test the new machine, but what a depressing lineup there was to choose from. After lots of umm-ing and ahh-ing, we settled on: 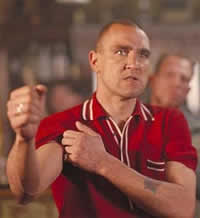 Lock, Stock and Two Smoking Barrels: I'm not normally one for violent films - the only other one I really liked was "Reservoir Dogs" - but this one was such great fun despite the blood-splatter and the overall nastiness meted out to everybody. The story felt a bit like last man standing, and definitely a mythical look at life in the East End ("EastEnders" being another). But hugely enjoyable to watch and I really didn't care which side would come out left standing and alive. I've always had a bit of a crush on Dexter Fletcher when he was in Derek Jarman's Caravaggio as a 20-something but he hasn't aged well 20 years on. Mind you, neither has Sean Bean, who was also in Caravaggio. But I digress. Sting definitely is a great actor and his eye close ups looked scary and creepy. But the real hero of the story is Vinnie Jones, who as a doting father just made me laugh out loud when chiding his son for using bad language while perpetrating the most sickening violence himself.
Totty award: Jason Statham. 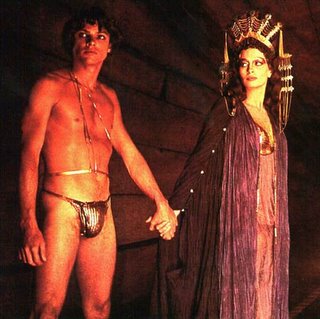 Fellini Satyricon: The sumptuous scene setting, riotous, almost psychedelic colours and freeflowing story definitely label it as a 1960s movie, but definitely one that Hollywood could never have made, and still probably can't. Most Fellini films are simply always a joy to watch, and criticising aspects you would change if you were to do a re-make (such as not clothing slaves at all rather than use those ridiculously coloured underpants) is all part of the fun. It definitely shows up how tepid all the recent sandal and sword movies are.
Totty award: Hiram Keller

For the Christmas holidays we're going to watch the full version of Lord of the Rings, all 9 hours of it, in one sitting. I have actually never seen any part of it so it was about time to see what CGI has done to New Zealand.
Posted by Hans Versluys on Tuesday, December 20, 2005

Email ThisBlogThis!Share to TwitterShare to FacebookShare to Pinterest
Labels: film