Bringing liberation to European people, one Eurovision Song Contest at the time 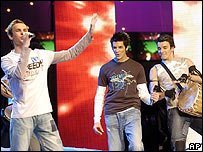 Serbia and Montenegro are at serious loggerheads and in danger of splitting apart after a contested vote over who should represent their federation at this year's every gay boy's cultural calendar highlight, the Eurovision Song Contest in Athens in May.
A Montenegrin boy band, called No Name, won the contest but Serbian voters booed them off claiming the vote was rigged. Now Serbia has withdrawn from the Athens contest altogether, the BBC reports.
Montenegro is due to hold a referendum on independence on May 21st, the day after the final, so boybands of the world unite and fight for your freedom!
Posted by Hans Versluys on Wednesday, March 22, 2006

Email ThisBlogThis!Share to TwitterShare to FacebookShare to Pinterest
Labels: Eurovision