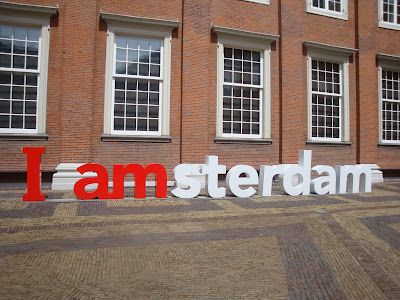 Amsterdam has cleaned up its act. In the 1970s, when I first started visiting the city, it was run down, smelly and dirty: dog shit was everywhere, the canals were polluted and there were a lot of empty buildings - either condemned and falling down or squatted in. The underground metro was under construction and under heavy, sometimes violent protest. It cut a swathe through the eastern old town which is now built up with 1970s style apartment blocks that do not fit in well with the rest of the historic centre. But they seem to have pulled their shit together and made huge progress over the past decades in order to get the tourists back, and also to stem the population loss in the inner city. It has now turned into, seemingly, a pleasant place to live, a fantastic place to visit and to hang out with the locals (and the many, many tourists) and to be able to basically walk everywhere that may be of interest. 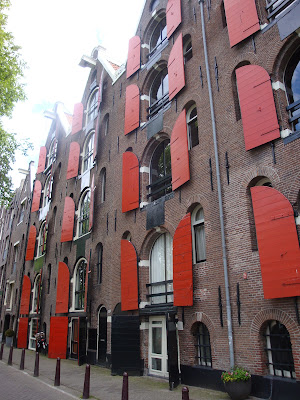 I wandered for three days and barely saw the same things twice. The "grachtengordel" gives structure to the cityscape and every corner's vista is different. Highlights were the Homomonument; the Jordaan area; the Waterlooplein flea market; the Oosterpark with its tame herons and the interesting architecture of many houses along the canals.
The bicycle rules here and as a pedestrian you are at constant risk of collision if you don't watch out permanently: the cycle paths are not well indicated (in Belgium they are paved with red stones, which gives some certainty on where to walk) and the sheer number of bicyclists can make simply crossing the street hazardous - never mind the cars and trams as well. One option of course is to rent a bike so you can join the menace but I preferred to buy a 72-hour public transport card which at €16 was quite good value. 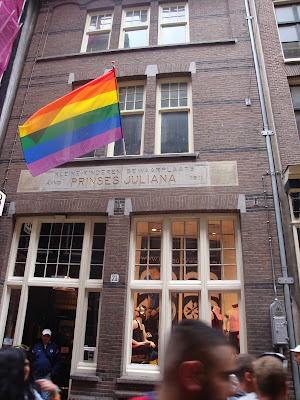 I didn't go to the trio of museums most tourists make a beeline for because I had been there a few times before. Part of the Rijksmuseum is under reconstruction and out of bounds, the Stedelijk Museum re-opens later this year and the queues at the Van Gogh Museum were quite long, so I sought out some interesting alternatives.
One new venue is the Hermitage Amsterdam, a former old women's refuge from the 18th C, now rebuilt as an annex of the St Petersburg Hermitage. Temporary exhibitions are their specialty, if somewhat pricey and busy with tourists groups. The other one is the Amsterdam History Museum, walking through a physical, social and economic history of the city over the last 800 years. Housed in the former city orphanage which was set up and patronised by the richer burghers (the city motto is "Charitable, Heroic, Steadfast") it's small enough to keep your interest. The interactive part was very informative: I didn't realise that Amsterdam actually took the side of the Spanish during the Dutch independence war when the Duke of Alba stationed troops here. Also a diagram showing the relative heights of Amsterdam buildings compared to sea level makes you think about the fragility of the physical space you are actually standing in - in many places several metres below sea level or barely above. 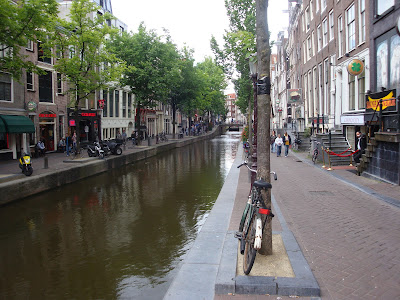 The Walletjes (red light district) is far more than just endless window displays of female flesh, it's actually a fun and beautiful canal area where many citizens still live. The University is there too, plus of course a plethora of coffee shops and gay venues, which both still embody the old atmosphere of tolerance and pragmatism not encountered in many other places and for which Amsterdam has always been famous for and made attractive by. Oh, and everybody speaks English everywhere, even when they are Dutch.
Posted by Hans Versluys on Thursday, July 05, 2012