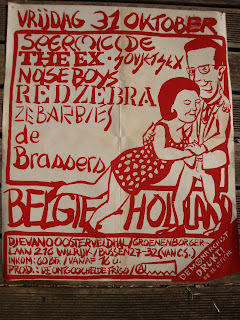 I had almost forgotten about it, but 31 October is kind of a special night in my biography and not for any pagan ritualistic reasons to dress up and scare the locals (I don't need an excuse of Halloween for that).
On 31 October 1980, a few mates and I organised a punk rock festival at the local youth club Djevano in a very middle class Catholic suburb. About 5 bands were scheduled to gig, but within an hour the local citizenry were alerted to and alarmed by the display and parade of about 1,000 technicolour-haired, leather-clad punks of indeterminate gender (as was the fashion then - I remember wearing a white woollen ski jumper, I mean, I wanted to stand out from the black-attired crowds!).
The cops were duly called and arrived in a few VW-combi vans. In the middle of a set, one burly law enforcement officer took to the stage to declare the proceedings over. I'm not sure what they teach these guys in cop school about handling crowds of a subculturally, shall we say, volatile nature, but the reaction from the amassed crowds, many of whom came from a large area of Western Europe for the occasion (the event had been publicised in a large number of fanzines, what with no internet and all) was rather irate.
So it all ended in tears: chairs were thrown onto the stage, the cops retreated with batons drawn and clubbed their way out, grabbing a few punters left and right and dragged them into their combi-vans, which by this stage had been reduced to window-less and smashed motorised pig-crates. The suburbs hadn't seen such a display of the arm of the law meeting the unmoveable force of speedy punks on a high. White Riot indeed.
It, of course, made the papers the next day, but at the time I was unaware of the damage caused outside the club, since I was busy clearing up the debris inside as every youth club committee member was wont to do after each night. Two days later I was summoned to the cop shop for a statement. My sociological explanations of the happenings - I had freshly graduated three months before and keen as to display my research findings (I had done, after all, my BA thesis on punk rock) - seemed to interest the duty sergeant but his supervisor, who was sitting in on our interview, just went from ginger to red to beetroot in the face the longer I went on. There was some thumb thumping, shouting and general frustration all round, but in the end they had to let me go - even after threatening to sue for damage caused to their beloved cattle trucks. Of course nothing came of that, but I guess they really had to cover their cop arse: several punks who were randomly arrested on the night were fined, even though it was completely impossible to find the rioters responsible for the damage caused.
In the end, the youth club, where I had been hanging out and working for six years, cancelled my organising committee membership, but I was not banned from the premises. The club soon after closed for good.
So that was 25 years ago last weekend. It was also, auspiciously, Radio Centraal's first broadcast night. I worked there for 6 years and my media career was born.
Posted by Hans Versluys on Monday, October 31, 2005