When you travel to Hamburg, I recommend you stay at Thomas & Dietmar's homestay on Hansaplatz in the St Georg district of the city, a stone's throw away from Hamburg's main train station. A very warm welcome, all the information you need and a 3-minute walk to all the venues listed below.

S.L.U.T Club (Rostocker Strasse 20, St Georg): A corner bar in the multicultural and multi-sexual district St Georg. Rainbow flags abound here and you cannot miss the open atmosphere welcoming gay men in the neighbourhood. The Slut Club is prominently sited on the crossroads of two streets. No need to go looking for obscure entrances down back alleyways.
Open Wednesdays to Sundays with themed nights it caters for the non-vanilla crowd, which as usual in Germany means: sports gear, leather, rubber and skinheads (or just go in your birthday suit and you never violate the dress code). Sundays have monthly themes such as fisting or watersports.
The bar area is roomy and easy to start a chat with the locals. The scene in Hamburg is a little smaller than Berlin so many punters know each other and treat the venue as a meeting place too. The staff are very friendly, multi-lingual and efficient.
There are two cruise areas, one with a maze and a sling, the other with two slings. On Saturday nights the basement is also open to handle the overflow of punters (it features a bath tub too). There are two porn screens, usually showing footage of the theme night to bring you in the mood.
My major gripe is (as always) the amount of tobacco smoking that goes on inside. Being used to years of officially enforced non-smoking laws it is hard on your eyes and lungs. But nobody seems to mind, even when pointing it out. 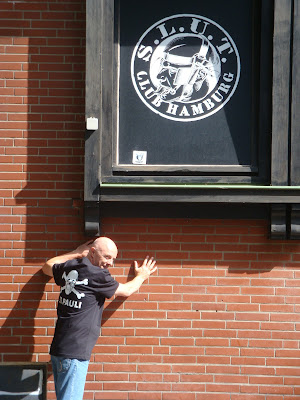 Your intrepid reporter at the SLUT Club.

Contact Bar (Danziger Strasse 51, St Georg): Another corner bar, but smaller than Slut Club. It also appeals to a broader gay clientele, what with quiz nights and beer busts. It's closed on Mondays and has occasional theme parties on other days.
I've only been to the naked night and a good time was had by all as far as I could see. It's quite chatty too. Quite a few people turn up with their partner, it seems.
There is one porn screen, plus a small cruising backroom, which can get a bit cramped at times.
At midnight the theme ends and clothed people started to appear, which is a little disconcerting for the naked romeos still left. I mentioned this anomaly to the owner, who, as usual, shrugged.

Tom's Saloon (Pulverteich 17, St Georg): One of the longest established gay bars in Hamburg but it doesn't look too tired as it has changed venues in the past.
It's a basement bar kitted out with macho paraphernalia (the bar is supposedly held up by a series of heavy chains hanging from the ceiling) and Tom of Finland imagery, which isn't really my cup of tea. But you can ignore all that and concentrate on the rest of the venue.
There is usually a strict fetish dress code, except on Mondays when it's 2-4-1 drinks night without dress code and with free entry. So cheap beers and all the meat you can eat in the long narrow backroom, which is quite under-lit and features one sling. I could not see any condom availability and, again, smoking is prevalent everywhere.
The anteroom of the backroom has a huge circular table at shoulder height, which (I presume, it didn't happen when I visited) could function as a stage for sexual shenanigans.
A lovely feature is the urinals, which are situated in a circle around a pole so all the pissers can basically watch each other easily.
The one person staff was efficient and attentive, and there were two porno screens.
Posted by Hans Versluys on Tuesday, May 29, 2012